For a project in my leadership 100 class, we had a large group project called the Fred Factor. The Fred Factor is based around one question; Are you a Fred? Also, the Fred Factor has 4 main principles; Everyone makes a difference, everything is built on relationships, you must continually create value for others, and you can reinvent yourself regularly. 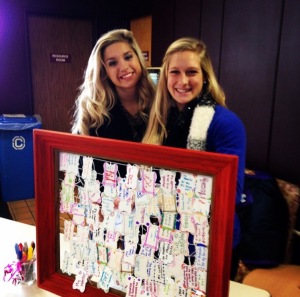 Our class was split into groups consisting of around 5 or 6 people and we were assigned the task of doing something on Central Michigan’s campus or in the surrounding community that promoted the meaning of being a “Fred”. For my group, we went through multiple ideas until we finally came to a conclusion. Our final result was #CMUGiveThanks, and we decided to have our location on north campus in Robinson Hall’s lobby. The set up for our project was pretty simple; Poster, table, frame, yarn, and “Give Thanks” paper slips. What we did was ask people to write down what they were thankful for and tie their thankfulness to the frame, and then keep the word going by posting what they are thankful for on social media! It was a total success and it was

amazing to see students, staff, and faculty, participate in the event. Being a “Fred” correlates with realizing that the little things in life truly make life so meaningful, and how the little acts of kindness really are important. Fred the mailman did the little things in his job, but that’s what made him so unique. When people took the time to really think about what they were thankful for, they realized it was the things that you take for granted, such as family, friends, and an education.